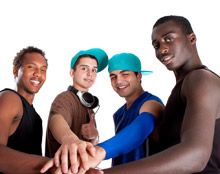 The Human Immunodeficiency Virus, or HIV, is the virus that causes AIDS, the Acquired Immune Deficiency Syndrome. Over 1.1 million people in the United States are living with HIV, and almost a fifth (18.1%) of HIV infected Americans are unaware of their status. Although there have been major advances in the prevention and treatment of HIV, we continue to see too many new HIV infections and too many AIDS deaths. For these reasons, a general understanding of HIV is essential to public health.

How do people get HIV?

It is important to recognize the main modes of HIV transmission. HIV can be passed from one person to another through bodily fluids such as blood, semen, vaginal fluids, and breast milk. Unprotected sex with an HIV infected person and direct contact with HIV-infected blood through shared injection equipment, open wounds, or mucous membranes (eyes, mouth, rectum, vagina) may lead to transmission. It is extremely unlikely for HIV infection to happen simply through brief contact between infectious bodily fluids and intact skin. The risk of HIV infection from any single sexual exposure is generally low, but receptive anal intercourse is the highest risk sexual activity, followed by receptive vaginal intercourse. Oral sex is very low risk, and HIV cannot be transmitted through saliva, sweat, or tears.

What impact does the virus have on world populations?

Almost every HIV infected person will eventually develop and die from AIDS, if the virus is untreated. The World Health Organization (WHO) estimates that 70 million people have been infected with HIV and 35 million people have died of AIDS since the beginning of the pandemic. Currently, about 0.8% of adults between 15 and 49 years of age worldwide are living with HIV. Sub-Saharan Africa continues to be the most affected region, reporting an average of 1 in 20 adults living with HIV. In the United States the widespread availability of medications that treat HIV has meant that many fewer people with HIV progress to AIDS, but in less economically developed parts of the world many people still die of the disease.