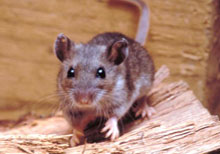 What are Hantavirus and HPS?

According to the California State Department of Public Health (CDPH), Hantavirus Pulmonary Syndrome, or HPS, (sometimes referred to as Hantavirus Cardiopulmonary Syndrome, or HCPS) is an uncommon, potentially severe disease of the lungs which was first recognized in 1993 in the "Four Corners" area (where Utah, Colorado, Arizona, and New Mexico meet) of the southwestern United States. The disease is caused by a virus called Sin Nombre that is carried by wild mice and shed in their feces, urine, and saliva. HPS is a rare, but often fatal, disease.

Where is Hantavirus found?

Hantavirus is found in all regions of the United States. Deer mice are the primary carriers, along with cotton rats and rice rats in the southeastern states and the white-footed mouse in the Northeast. Potential sites where people may be exposed include areas that offer a habitat for rodents: rural areas, forests, fields, farms, barns, outbuildings, and sheds.

How do you get HPS?

The virus is shed in the droppings, urine, and saliva of rodents. Humans can become infected when they inhale the virus which can get into the air when rodent droppings, urine, or nesting materials are agitated. Humans cannot transmit the virus to one another (e.g. close contact with or providing healthcare to someone who is infected).

According to the CDC, there are several other ways rodents may spread Hantavirus to people:

The types of Hantavirus that cause HPS in the United States cannot be transmitted from one person to another. For example, you cannot get the virus from touching or kissing a person who has HPS or from a health care worker who has treated someone with the disease. You also cannot get the virus from a blood transfusion in which the blood came from a person who became ill with HPS and survived.

How people get hantavirus »

How can I protect myself from getting HPS?

See the California Department of Public Health brochure on Hantavirus.

What is Alameda County doing to control the spread of Hantavirus?